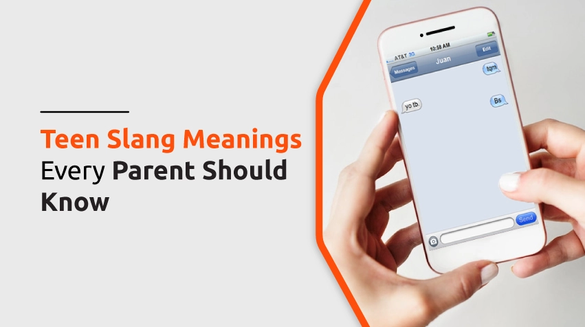 Having grown up in this digital era, generation Z has developed a completely different approach to communication. In their messages, teens use emojis, slang, hashtags, and acronyms that utterly confuse us, millennials.

As a parent, it must not be evident for you to understand the slang your teenagers are using. With the rise of social media applications, mainly among teenagers, they seem to have developed a new language for interacting.

But these slang words used in social media can bring adverse effects. So for the sake of your children, every parent must know about teen slang words. It will be easier for you to set your parenting tips and protect your children when you know the meaning of the slang words.

So for all parents who want to understand what the latest secret teen slang and emojis mean, we have decoded them. This article covers the parents' guide to teen slang words and emojis.

Seeing and hearing your teenager's text messages and slang may seem ordinary, but do you really understand what she's saying?

Here's what parents should know about sex-related emojis, drugs, and general slang emojis, so they don't get confused. In the following paragraph, let’s explore the teen slang meanings every parent should know.

Following are the general tween and teen slang words and emojis with their meanings.

🙃 upside-down smiley emoji used to show annoyance about something

👻 Indicates being “ghosted” (dumped without explanation)

🧢 It can also be considered a "cap" symbolizing a lie

👉👈 Nervous, Shy (Generally in the case of flirting)

🧿 Represents driving away the "evil eye."

🥶 Referred to as "savage" when commenting on something snarky or mean (as in. "That was cold")

🔪 Expression of being unhappy or intending to cause harm.

💯 An approval stamp; "I agree." Commonly used by teenagers to show agreement, honesty, or truthfulness.

☕ Represents the latest gossip. As in, spill the tea.

🐍 A symbol used to indicate a "backstabber."

📸 used to ask for nude photo

🤣🍑➡️ It means Laughing my ass off

A boyfriend or girlfriend can use sexual emojis to convey their desires. It is familiar between teens dating each other. The emojis in this set carry subliminal sexual messages.

🚛 “Dump truck,” which means a large and/or shapely bottom

🎞️ Someone wants an x-rated movie

👀 Used when sharing or receiving nudes

🤤 A desire for sexual intimacy (generally expressed in reaction to nakedness)

🐫 used to indicate the act of sex (humping)

⚗️ Used to indicate a bong

🥧 A large number of drugs

Parents need to be aware of the meaning of popular slang terms teenagers use. Some of these terms may have positive or neutral connotations, while others may be associated with risky behavior. Parents should talk to their teenagers about their use of slang as texting codes and listen for any terms that may cause concern.

Parents can also limit their child’s social media time and texting and establish healthy relationships with their mobile devices. Additionally, teach them a bit about the consequence of sexting.

If your child didn’t give you access to his phone, then you can use parental control applications to read your child’s text messages remotely and keep them safe. Fenced.ai offers many other security features like location tracking, web filter, geofence, social media monitoring, etc.

How Parents Fighting Could Affect a Child's Mental Health