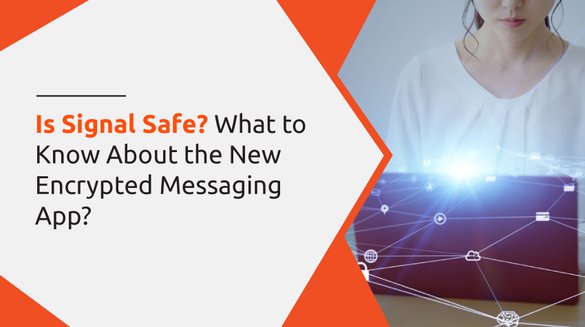 Is Signal Safe? What to Know About the New Encrypted Messaging App?

Social media is not just an accessory these days; having a social media account is a necessity. Social media is a platform used for being entertained, informed, and also for socializing. They are entertaining to use and have proved to be highly crucial to the collaboration of individuals these days.

With the increase in social media among adults and children, children are in danger. However, no matter how essential social media is, you cannot forget the scammers and bullies you find on social media.

With the rise of social media, security on these platforms has been an issue. Social media security is always a question, and people question social media authenticity and the fact that they sell their data to advertisers.

They have also questioned the ethics involved in using user data. Social media such as Facebook have also faced controversy regarding selling their data to foreign countries.

Due to these reasons, it is harder to trust any social media platform on messenger applications. The recent controversy regarding the leaking of messages from WhatsApp has also proved that these platforms cannot be trusted.

All security issues in applications like WhatsApp and Messenger have made users look elsewhere for a messaging application. So there has been a significant influx in users downloading and logging into the signal app.

So the question everyone is asking now is if the signal app is safe? If you are asking the same questions, keep on reading this article to find out.

What is the Signal App?

The signal app is a free messaging application is a private application that provides the service of encrypted message transfer. This application was first launched in the year 2014 by the Signal Messenger LLC and Signal Technology Foundation.

It is compatible with Android and IOS devices and also with laptops. This application uses end-to-end encryption for the privacy of the users. So what does encryption mean? Encryption in a messaging application means that account holders can use the application without outsiders being able to view the content of the messages. The platform itself also cannot view users’ messages.

If the messages of an encrypted application intercept the messages between the users, it will look like a series of distorted texts and symbols. Signal has software that is open-source in nature, unlike other messaging applications. Signal uses the mobile phone numbers of its users as identification to them.

● Group chats with up to 1000 participants

● Invite friends to join the app

WhatsApp now has released a statement that they have been sharing data with Facebook since the year 2016. This rule was not applied to all users. People with Whatsapp accounts could deny sharing their data with Facebook and still use the Whatsapp application. But according to the announcement of Whatsapp on Feb 8, this will no longer be possible.

Signal has seen a surge of popularity since then. Since Whatsapp made the statement, Signal has had over 7.5 million downloads in a single week. This is an increase of downloads by 4,200%.

The Signal is not under big tech giants like Facebook owns Whatsapp. It has always been preferred as the communication method of choice for activists, professional hackers, and messenger users worried about their user data privacy.

Initially, Signal detected an increase in the number of users during the spring season. This was as people were participating in protests with anti-racial thoughts after the killing of George Floyd. They asked companies to hand over user’s data. This is how Signal gained popularity.

The Signal is so famous and has spotted its position on top of the Apple App Store, followed by Google Play Store. Its system having two-factor authentication got delayed for some time as there were so many people trying to download and access the application while signing up for Signal.

Is the Signal App Safe?

The messages that one sends and receives in Signal have encryption enabled with the help of the Signal Protocol. The Signal protocol makes sure the messages are confidential, and no other third party can access them. The maintenance of integrity is followed by authentication with consistency in participation from participants; Signal assures secrecy. It lacks anonymity preservation, needing a server to relay messages and storing public key material.

With privacy, the application also offers a message disappearing feature. The disappearance takes place after time frames are adjusted. Whatever you do inside the app, the Signal does not collect any data, and it is entirely safe.

From the user’s side, the only information you have to provide is your phone number. The company is working to make encrypted contact servers too. If law enforcement approaches Signal seeking others’ private data, it has nothing to give as they do not store, ask, or seek users’ data.

The signal application does not collect data as this is a non-profit organization not willing to make money out of people’s private data. It is not concerned with tracking people or gaining revenue by advertising.

“Message Requests” give users the option to block, delete, or accept messages from somebody trying to get in touch with them. Users can see the name and photo of the person trying to message them in individual conversations. For group conversations, users can identify who is in the chat before joining, giving them better control over who they are talking to.

How Does the Signal App Work?

The Signal is considered safe and more secure than other message exchanging applications due to its end-to-end encryption process. This involves the receiver getting the sender’s message that is encrypted and only the receiver’s device has the key to unlocking the message as the message sent was only intended for the receiver.

The security is so high that the application itself, i.e., Signal, another third party including the government, or even a phone company, cannot access the messages exchange. Because of this reason, it falls under the choice of people in the media, regular users, government officials, and anybody who wants privacy. During summer, the protesters who protested on law enforcement accessing their communications also trusted Signal and, as a result, started using the application.

Concerning security, the application’s messages are safe. This is possible when both the one sending and the one receiving messages are on the app. If this is not the case, then this is just the exchange of text normally.

If you want to ask your colleagues or friends to join Signal, there is a feature for sending invitations to others and helping them download the app. Similarly, if you wish to block someone, it is as simple as pressing a button.

With so many messaging apps, the feature of encryption is not present only in Signal. Other applications like Telegram, WeChat, etc., also have a similar feature. What makes the Signal unique is its source code. The source code is made publicly available in which security or other experts can experiment and finally strengthen the application.

The signal app provides end-to-end communication, making communication safe and secure. In this app, only the participants can view the messages and also allow you to set your message to disappear mode. I loved the Signal app due to its end-to-end encryption features.

If you have used the app, I would love to know your experience with the app. Please feel free to mention them in the comment section below.