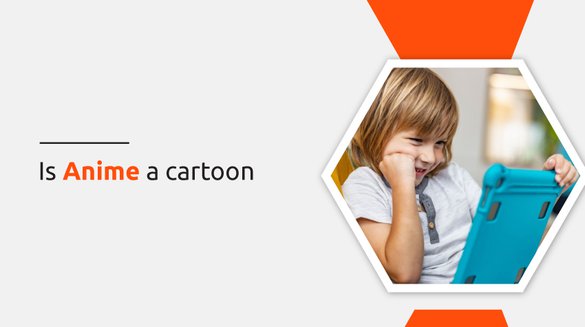 Is Anime a Cartoon? Difference Between Cartoon and Anime

Japan introduced Anime to the world, and in fact, Japan considers Anime to be a part of its culture. If you have visited Japan or ever consider visiting Japan in the future, you will see Anime all over the country. You can see Anime in movies, magazines, school books, marketing pamphlets, anime games, and so on.

Anime is not a cartoon or a new type of entertainment; Anime has been around the entertainment industry since 1917. You can find children these days who love anime movies and series.

Many times people think of Anime as a cartoon and get confused between Anime and cartoon. Some even consider Anime as an Asian animation style. There has been a constant debate about whether Anime is a cartoon or a kind of entertainment.

Characters in Anime are similar to humans and have a height of 8-9 heads tall, while some are dwarfs. Anime characters are known for their exaggerated facial expressions. For example, when the characters are around their crushes, their nose gets red. When they get embarrassed, they have sweat on their forehead.

Due to multiple languages, translation, dubbing, the popularity of Anime is increasing. Now you can even find subtitles in Anime which has been able to increase the number of audiences. Also, you can see a lot of improvement in Anime over the past year.

What is the Difference Between Cartoons and Anime?

There is a constant argument between Anime vs. cartoons. The anime word is derived from the word animation. Japanese animated motion pictures are Anime, while cartoons are related to humor or satire, which originated in the USA. 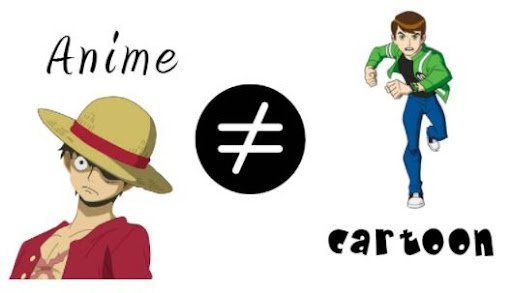 If you look at the character design of Anime and cartoons, you will see a massive difference between cartoon characters and anime characters. Characters in Anime usually look human; however, these characters have big eyes, wild hair, large arms and legs, and so on.

The next difference you can find between Anime and cartoons is the subject matter. In Anime, you can find different genres like drama, action, horror, and so on, but cartoons are always humorous.

Anime are like TV series; they have serial numbers or names, each episode has their name and number. Animes are like short films, usually 20-25 minutes long. At the same time, cartoons do not have episodes like Anime.

Usually, in Anime, episodes are related one after another, while cartoon episodes are not associated. Every episode shows different stories, and the length can be from 5 minutes to 1-hour long. There are no continuous stories in cartoons like you get in Anime.

In Anime, you will find any genre from drama to action to horror. In a cartoon, you will only find genres related to humor, and you cannot find many genres in cartoons like you can find in Anime. In Anime, you can see fights, violence, bloodshed, and so on. But cartoons are just voice acting of characters, some funny and satirical content, and much more.

Is Anime for Children Only?

Anime Can be Pretty Serious

Anime is not always fun and full of fantasies; sometimes, anime can get pretty serious. Some anime contain lots of violence, fights which makes them unsuitable for children.

Also, some anime are made to deal with social issues and adult themes, which are usually targeted at adult audiences. Hence, even though Anime contains lots of animated characters that look like cartoons, it is for adults.

Anime that is related to actions and the horror genre contains lots of physical violence. If you watch anime related to action and horror, you might see blood and many physical fights. There is a lot of revenge in Anime; it can be dangerous for a young mind to cope with all the actions and revenge.

Anime which are made for children do not contain actions and violence. But anime targeted at adult audiences, especially those of action genre, have violence and fight.

Anime is not free from adult content. Many adult anime contain adult jokes and explicit content, making it inappropriate for teens to watch them. Such adult content can disturb children’s brains and harm their mental health.

Likewise, some anime also show characters taking drugs and alcohol, which can influence children. Children might think taking substances will make them look cool and encourage them to take medications as well. Also, if Anime contains adults or any substances, then Anime itself rates the content as 18+.

Some Animes Deals With Loss and Grief

Anime that is related to drama usually contains topics related to loss and grief. Characters in Anime are usually grieving over the death of their loved ones. The death of someone can mentally disturb people.

You might have your own experience while watching movies; if some character dies, you get upset about it for some time. Similarly, when you watch Anime, the character keeps grieving and feels attached to the character. Hence, Anime is for adults as well.

What is the Danger of Anime?

Hence, all the animes are not dangerous for kids, and Anime is only hazardous for kids if they watch content that is not appropriate for Anime.

Are Anime and Manga the Same Thing?

Many people think that Manga and Anime are the same, but their genre is different even though anime and manga visual characteristics look the same. Manga is not animation movies like Anime; it’s comic books which are often black and white.

Manga is usually published on a weekly and monthly basis. You will need a few manga artists to publish Manga, and a Manga artist is also known as a mangaka. While Anime is animated films with complex storylines and characters, anime artists will require software like Autodesk, Adobe, Digicel, and many more in anime production processes.

If you compare Manga and Anime, many consider Anime to be based on pre-existing stories while Manga is said to be original. Manga can be turned into Anime, while Anime cannot be turned into Manga.

Summing up, even though many people think of Anime and Manga as the same thing, they are two different things. The art style of Anime is different from the art style of cartoons, and cartoons are primarily for kids while Anime has different genres and is suitable for all ages based on genre. Hence, Anime is not a cartoon.