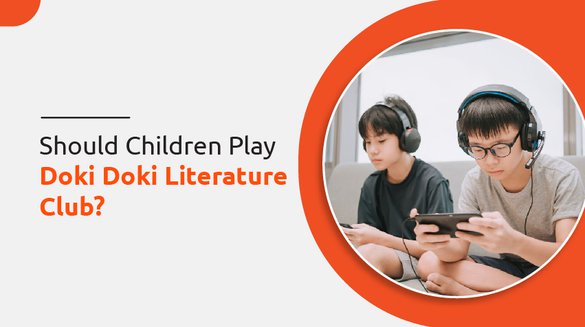 These days, many tweens and teens are into anime. The Japanese animation industry is the most popular and has a huge fan following. In 2017, this industry garnered over USD 18 billion.

Many anime games are launched and will be launched in the future. The reason tweens and teens love anime series and games is its way of storytelling, storylines, and unique characters. These games have fight scenes where teens need to fight for life, which excites them to play.

Besides fight scenes, the comedy scenes of the anime are what little kids love. Also, anime games have fantastic music and animation that represent Japanese culture.

One of the anime games that are popular among tweens and teens is Doki Doki Literature Club.

What is the Doki Doki Literature Club?

Doki Doki literature club falls under the genre of visual novels that you can download on your PC and Mac. This game looks like a dating game at first, but it has a massive twist after the first half of the game. There are many killing scenes, mostly suicide scenes, where the female characters kill themselves.

The female characters commit suicide either by stabbing themselves or by hanging. This game does not just have self-harm elements, but it also has many horror scenes, which makes the game more interesting among children. What’s more interesting is you can customize your character based on your preference.

Many people are considering Doki Doki as a controversial game because of its suicidal and horror elements. Recently, Doki Doki has released its new version that is Doki Doki Literature Club Plus.

Is Doki Doki Safe For Kids?

Doki Doki seems for kids who love poetry since players are expected to write poems to impress girls at the beginning of the game. But as your kids play the game, the game turns into a horror game as there are many horrific scenes.

Many children are downloading Doki Doki on their smartphones without their parent’s consent. Parents are worried about their children playing this game as it contains suicide and depression content, leading to many mental health issues among children.

Furthermore, there has been reported a case of teens’ suicide on which parents have blamed the game for their teens’ suicide. Parents even have said that the game is mentally disturbing, and once your child gets hooked to the game, it is pretty difficult for them to get out of it. Hence, the game is not suitable for children who are below 18 or who are emotionally weak.

What Can Parents Do?

Since Doki Doki is not suitable for kids, your kids might insist on playing Doki Doki either because of peer pressure or maybe they want to know what the game is about. No matter what the reason behind kids wanting to play Doki Doki, you must be beside them and keep track of their gaming activities when they are playing the game. Here are things you can do as a parent when your child wants to play the game:

Talk to Your Kids About Negative Effects of the Game

The first and foremost thing that you can do is talk to your kids about how children face mental health issues due to excessive gaming apps like Doki Doki. Children might not know about the negative consequences of online gaming; hence as a parent, it is your responsibility to teach your kids about online gaming risks.

You should teach them appropriate and inappropriate contents that they can find on Doki Doki. Kids’ mental and physical health can also get affected when they play online games for a long time which you must make them aware of.

Play The Game With Your Kids

If you allow your child to play Doki Doki alone, your child can get extremely engaged with the game. They prefer to stay quiet and play the game, making them think about the game all day and night. But when you play with them, you can constantly communicate with them and help them be less involved in the game.

Create The Schedule for The Game

How long can your kids play online games if you do not stop them from playing? Your answer will probably be all day and night, am I right? There are complaints from all parents about their kids’ gaming habits.

Keep Them Involved in Other Activities

One of the best options you can use is keeping your kids engaged by involving them in other activities. Children can keep their minds off the game when you keep them engaged in other activities unrelated to mobile phones. If your kids are always on the mobile game playing games, they can think about games. They can get easily disturbed by their game’s notification.

Physical activities are always the best way to keep kids’ minds active. It also helps to reduce your kid’s screen time. You can keep your child physically and mentally healthy by keeping them engaged in other activities. This is also one of the best ways to reduce their screen time.

Allow To Use Device Only in Specific Area

Your child can play Doki Doki literature club alone in their room or from some corner of their house. Even when you have restricted your child from playing the game, your kids can play without letting you know. You never know what your kids are doing on their phones if you let them use their phones inside their room.

Hence, it is better if you make a specific area as a device usage area. While setting device usage areas, you should set areas where you can keep an eye on them. By doing this, you will know what they are using on their devices. Moreover, you can even let your kids use specific devices from specific places, which will ensure that your kids are not involved in inappropriate activities.

You can also see your kids’ total time on their devices, which app they use the most. Moreover, these apps also block apps that are inappropriate for your kids. There are many parental control apps to monitor kids' device activities. Some of my favorite parental control apps are fenced.ai, Qustodio, Bark, Net Nanny, etc.

Summing up, it would be best not to allow your kids to play Doki Doki as it contains violent and suicidal content. In this game, the characters are stabbed to death, which influences kids to attempt suicide or attempt any other crimes.

Even when your kids insist on playing, make sure you are around your kids. If you have ever played Doki Doki, I would love to hear your review; please feel free to share your Doki Doki experience with us in the comment section below.