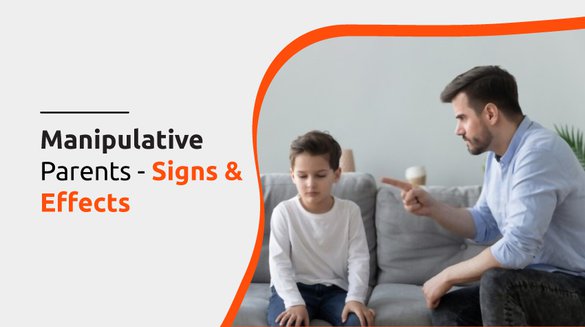 Throughout our lives, we all experience ups and downs in our families, which can be distorted from time to time. The parent can be a strict one, a controlling parent, a gentle parent, or an emotionally manipulative one.

Are you raised by one of those parents who manipulate children? As a child, we believe our parents can do no wrong and may not realize they aren't doing their best. We mistakenly believe manipulation is love.

Manipulative parents can be overwhelming and can lead to long-lasting psychological problems, personality disorders, and several adolescent problematic outcomes. However, detecting manipulation is often difficult, especially when it is perpetrated by a parent or older sibling with high authority.

There are however some signs which can help you identify the manipulators. If you are wondering what they are, here is an article detailing the signs and effects of manipulative parents as well as how to deal with them.

What is a Manipulative Parent?

Manipulative parents are those who nurture their children in a fully controlled way. Parents use indirect, deceptive, and dishonest methods to influence their children's behavior.

The manipulative parent uses their child's emotional vulnerabilities to control them. As a result, abuse can take many forms, such as gaslighting, emotional blackmail, or even physical abuse.

Manipulating someone is trying to exert control over them. Parents who manipulate their children rob them of self-esteem to gain parental psychological control.

When parents manipulate their children, it is thought of as brainwashing. Parental manipulation can be devastating for children.

Here we discuss how parents manipulate their children in a variety of ways.

There are many ways to manipulate emotions, but here are some tactics parents use when manipulating their children:

Passive aggression occurs when parents do not express negative feelings or difficulties toward their children. Rather, they use indirect ways to express their anger and humiliate the children.

Bullying, taunting, and shaming are emotional manipulation because they can generate fear or embarrassment within children.

Emotional bullying involves constant criticism, raising voices, and threatening behavior. The spread of rumors and the intentional exclusion of others can be considered social bullying.

If your parents purposefully blame things that suggest you should feel guilty or ashamed, this may be emotional manipulation.

Gaslighting is a particularly sneaky way to manipulate emotionally because it makes you doubt your perceptions and experiences.

Embarrassing you purposefully and repeatedly can also be considered emotional manipulation, and it may serve to generate shame that ultimately affects your behavior.

Parents manipulate their children by using fear to get what they want. Parental fear-based exploitation occurs when parents use power to control their children.

The methods of manipulating children include physical punishment, screaming, denying them freedom, and isolating them.

a child publicly comes under fear of exploitation.

Parents who manipulate their children often compare them to other children and blame them for their deficiencies.

Parental financial manipulation tactics involve exploiting a child using money as a weapon. The parents bribe their children with monetary rewards to get them to do what they want.

Children can be ruined by financial manipulation and have trouble adjusting to adult life due to losing trust in parent-child relationships.

Characteristics Of A Manipulative Parent

Children raised by manipulative parents often display behaviors resulting from their self-doubt and aggressive style. Having some authority is essential to any parent, but that guidance can sometimes go too far.

The manipulation of parents may vary from person to person. A manipulative mother may also be narcissistic. Narcissistic parents have massive arrogance and a sense of superiority. They manipulate their children to get what they want, causing emotional damage to them.

Some common characteristics of a manipulative parent include:

The upbringing of children is widely believed to be greatly influenced by their parents. Child development relies heavily on parents. When children are exposed to manipulation at a young age, they are affected in several ways leading to adolescent problematic outcomes.

Parental manipulation can take many forms, such as emotional, financial, or even physical. According to many psychologists, children are particularly susceptible to parental manipulation. Manipulative tactics used by an excessively controlling father or narcissistic mother can trigger feelings of excessive loyalty to the authority of the parents.

Throughout a child's development, they become knowledgeable that no parent is perfect. A manipulative parent can have serious consequences for a child; our identity and relationships are affected by it and our ability to deal with problems.

With age, we can recognize the red flags of manipulation and work through any issues arising from our childhood. The following are 7 common signs you were raised by manipulative parents.

Guild tripping is a trick that manipulative parents use everywhere. Usually, it begins with an unreasonable request that you can't possibly meet. The more you try to say no, the more your parents will make you feel guilty.

The following signs may indicate that your parents are trying to guilt-trip you:

Blackmailing children with emotional abuse is a manipulation technique that leaves them powerless.

Emotional blackmail is a technique parents often use when raising their children. They use shame, fear, pressure, threats, patience, and affection to manipulate their children.

The parent uses this strategy to manipulate your feelings so that you agree to their demands.

Gaslighting is a psychological manipulation technique that parents can use to control and manipulate their children. It is a common tactic of manipulative parents often used by toxic family members and can negatively affect the child's self-esteem.

If you suspect your parent may be gaslighting you, you must reach out for help. Gaslighting can be a sign of abuse and can have a lasting impact on your emotional and mental health. You should contact other family members except for parents or a trusted friend if you are in trouble.

The following are some of the signs that your parents are gaslighting you:

Children's decisions and behaviors can be controlled and manipulated by their parents through money and gifts.

It's been shown that manipulative parents use gifts to control their children. Giving them everything they want can keep them under their thumb and prevent them from becoming independent.In turn, this can affect a child's development, and it can lead to a life of dependencies and co-dependencies.

Whenever you suspect that you may be the victim of this type of manipulation, it's important to reach out for help.

These parents will go through their children's things, read their private thoughts, and try to control who they talk to and what they do. This is not only invasive and wrong, but it can also be damaging to the relationship between the parent and child. If you are a parent who values your privacy, then you should also respect your children's privacy.

Furthermore, they rarely consider their child's age and abilities when meeting that standard. Undoubtedly, their children would be pressured to perform exceptionally well and impress their parents.

7. Showing Love Based on Conditions

Conditional love is a sign that your parents are controlling as you grow up. Your parents become happy with you when they see that you follow their standards.

Conversely, if their children fail to meet their standards and requirements, they withhold their love until they improve. In this way, parents manipulate their children since they know they are eager for compliments, love, and care from them.

How To Deal With Manipulative Parents

If you have manipulative parents, it cannot be easy to deal with them. You might feel like you're always walking on eggshells, trying to please them and not make them angry.

Manipulative parents often use guilt to manipulate their children. They will make you feel guilty whenever you don't spend enough time with them or don't do what they want.

When you feel your parents are manipulating you, it is important to take action. Here are some of the steps to deal with the manipulative behaviors of parents.

When you're an adult, it's easy to see how controlling behavior from your parents can be manipulative. But when you're a child, it can be much harder to identify this behavior - and even more difficult to deal with.

Some actions can be taken if you think your parents are being manipulative. First, try to identify the controlling behavior. This may be anything from attempts to control what you wear or who you spend time with to more subtle forms of manipulation like guilt-tripping or gaslighting. Once you've identified the behavior, you can start to deal with it in a few different ways.

You can try to talk to your parents about it and explain how their behavior affects you. No matter how uncomfortable this discussion may be, it is the only way to change their behavior.

Feel free to express your feelings

One way to deal with manipulative parents is to let them know how their behavior makes you feel. This can be done calmly and assertively. By letting your parents know how you think, you are giving them the information they may be unaware of. This can be a powerful and informational purpose in helping to change their behavior.

The best way to deal with the manipulative behaviors of parents is to avoid isolating yourself. This means staying connected to your friends and family, even if your parents disapprove. Taking part in support groups or therapy is another way to get help from others who understand what you're going through. Lastly, don't forget that it's up to you to make your own decisions, even if your parents disagree.

It's not uncommon for children to feel manipulated by their parents. After all, parents have a lot of power and authority over their children. In this situation, you must remember that you do not have to feel powerless and can deal with manipulative parents by setting healthy boundaries.

As a result, you must establish boundaries with your parents about what you will and will not tolerate.

Child development requires parental involvement, which is a never-ending process. But what could be more devastating when you have manipulative parents? Aside from frustration and pain, you may also be experiencing physical health issues.

It is impossible to have a perfect relationship between parents and children since everyone has faults. Dealing with parental manipulation is challenging. Empathizing with your parents and not expressing anger will strengthen your relationship.

Every family issue is challenging, and you should take the appropriate steps mentioned above to make everything normal.