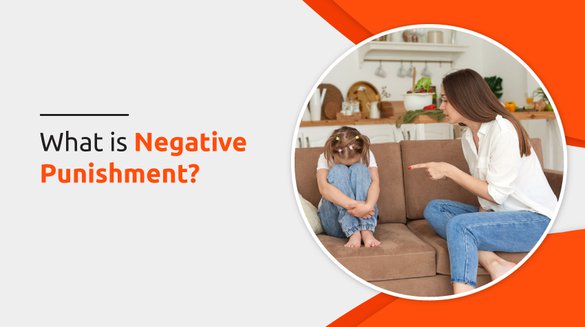 What is Negative Punishment (Examples and Effectiveness)

Negative punishment is a common disciplining technique often used by parents, teachers, and other primary caretakers. The goal of such punishment is to decrease the child's undesired behavior by making it less rewarding.

However, sometimes, it can make the child resentful, anxious, or even scared. According to research, approximately 70% of children who are disciplined using negative punishment exhibit at least one behavioral problem.

As such cases rise, it becomes essential to practice good parenting styles, emphasize positive punishment, use negative punishment sparingly, and ensure that the consequences are reasonable and proportional to the child's misbehavior.

By understanding how negative feelings affect kids, you can fine-tune the approach to make it more effective. So, how do you determine the weight of negative punishment?

In this article, we'll see how negative punishment works on kids, with its real-life examples, effectiveness, and side effects.

What is Negative Punishment?

Negative punishment is a form of discipline intended to reduce the likelihood of undesired behavior by causing a child to experience some form of discomfort or displeasure.

To make sure that your child understands the connection between their actions and the negative consequences that follow, you may need to repeat this type of discipline several times.

It is also one of the four important concepts of operant conditioning of BK Skinner’s theory, contrary to positive punishment, that usually occurs in response to a child's undesired behavior, such as refusing to eat vegetables or slamming the door.

As we know, there are two types of punishment under operant conditioning that can be used to modify behavior in kids: positive and negative punishments.

As the name suggests, positive punishment is when an unpleasant consequence is given after an unwanted behavior is displayed. For example, if a child hits another child, the parent may give them a timeout.

On the other hand, negative punishment is when a desirable consequence is taken away after an unwanted behavior is displayed. For example, if a child hits another child, the parent may take away their dessert.

In contrast, the primary difference between positive and negative punishment is that with a negative one, the intensity of the experience is so high that it is likely to be highly detrimental and undesirable for the child.

While positive and negative punishment can both be effective in modifying behavior, it is important to consider the potential consequences of each before deciding which to use.

Some Examples of Negative Punishment

There are many real-life negative punishment examples. Some of the examples commonly used are:

Withholding privileges is key to keeping a child in line, especially if the child is young. But discipline can be effective if you take away what they love the most.

"Don't even think about going out. Get your homework done!"

Making a child do chores

Making a child do chores is one of the classic negative punishment examples in child-rearing.

"Put all the plates on the sink and wash them! Once that's done, clean the living room."

By making the child do unpleasant tasks such as cleaning the dishes or taking out the trash, the parent sends negative reinforcement indicating undesired behavior will not be tolerated and will result in undesirable consequences.

Such punishment with negative reinforcement can be effective in reducing undesired behavior.

Keeping the child locked in their room

"Enough of your tantrums! Stay in the room until dinner."

Being isolated in their room and unable to go out for a few minutes can feel like a child is deprived of their freedom. Such operant conditioning punishment is typically used as a last resort after other methods, such as verbal reasoning and logical consequences, have failed.

While the child experiences isolation, an adult is still supervising them.

Such punishment is meant to force the child to focus on the sensation instead of the action. However, research shows that spanking affects children's brains similarly to severe maltreatment, causing them to perceive threats more powerfully.

Therefore, consideration of such factors is essential before imposing physical punishment.

Negative punishment can work for children, but it typically requires a lot of consistency from the parents. If parents consistently use such punishment, their children will be more disciplined and behave better in the long run.

So, how does the negative approach of punishment work on children?

How does Negative Punishment work?

The goal of negative punishment is to decrease the likelihood of undesired behavior by teaching the child that bad behavior will have consequences. Additionally, it teaches the child how to control their actions and turn unwanted behavior into desired behavior.

It's a negative operant conditioning approach, generally used for kids by making them realize and take responsibility for the consequences of their actions. In the context of parenting, negative punishment is used to decrease the frequency of unwanted behavior such as tantrums, whining, or verbal aggression.

The negative approach always plays on the amygdala - the part of the brain that controls emotions and impulses. As children are more likely to remember negative punishment rather than a positive punishment, using this method can be an effective way to discourage bad behavior.

As reported in a recent study, Negative Punishment is very effective when it comes to changing their negative behavior. While positive punishment has a place in both parenting as well as teaching, the study proves that negative one is 10% more effective in teaching a child a specific concept.

There appear to be varying degrees of effectiveness for negative punishment on children. Among them are:

The effects of negative consequences can be seen immediately in terms of influencing children's behavior when delivered correctly.

Kids react immediately after the negative consequence happens and usually don't want to experience that again. If the consequence is severe enough, they may even actively avoid the situation where it happened.

The persistent type of effectiveness is when the effects of the punishment continue even after the negative behavior has stopped. Usually, this is achieved through negative reinforcement, which involves delivering an unpleasant punishment for undesirable behavior.

The fear of negative consequences can make it difficult for children to stop engaging in the punished behavior, as they may fear the consequences even after they have already occurred.

Some punishments, such as sending a child to their room, taking away privileges, or spanking, typically have short-term effects on kids. These punishments help discipline the children because they want to avoid getting punished again.

Typically, kids want to avoid getting into trouble again and make it clear that breaking the rules has negative repercussions.

Negative punishments also have long-term effects on kids that help to make them disciplined. When a child is subjected to punishment, especially if it's a negative one, it can leave them feeling scared, anxious, and guilty.

The feelings associated with the negative reinforcement and punishment can encourage good behavior in kids.

Side Effects Of Negative Punishment

There is a lot of debate surrounding using negative punishment with children. Some experts believe it can be an effective way to modify behavior, while others think it can have harmful side effects.

One of the potential side effects is that it can create a feeling of fear or anxiety in children. When they are constantly being punished for their actions, they often start to feel troubled and believe they can never do anything right. Such a feeling of hopelessness can be damaging to their self-esteem.

In addition, it can result in resentment and defiance. Children who are constantly being punished may start to rebel against authority figures and may become more resistant to rules and regulations.

As there are both potential benefits and risks involved, it is crucial to be aware of the adverse effects and support the mental health of your children. So, how to use the negative punishment correctly?

How to use negative punishment correctly?

Here are some guidelines on how you can use negative punishment on a child without having a negative impact :

The negative punishment should be immediate to be effective. If there is any delay between infraction and punishment, the child will likely forget what they did wrong and why they are being punished.

Additionally, immediate punishment will help to stop the child from engaging in bad behavior again.

When punishing your child, it is important to ensure that the punishment is appropriate for the offense.

For example, if your child breaks a vase, a reasonable punishment would be to have them help clean up the mess and pay for the vase. However, if your child hits another child, more severe punishment, such as a time-out or loss of privileges, may be warranted.

Studies have shown time and time again that physical or corporal punishment does not lead to long-term behavioral change in children. It can often lead to more aggressive behavior.

In addition to being ineffective, corporal punishment can also harm children. It can cause physical pain and emotional trauma. It can also lead to resentment and hostility towards the parent or caregiver.

It is always important to be consistent with the punishment you administer. If you constantly change the rules or the consequences for breaking them, your children will become confused and uncertain of what is expected of them.

If you are consistent with both negative and positive punishments, your children will soon learn what they need to do to avoid it.

Always try to use negative punishments as a last resort. It can often lead to resentment and can be detrimental to kids. If you frequently resort to negative reinforcement or punishment, it may be a sign that you need to reassess your parenting approach.

Is it really necessary to punish your child negatively?

As a parent, it can be difficult to know when and how to discipline your child. You may feel like you are negatively punishing them for their bad behavior, but is this really the best approach?

Not really as it can be an ineffective and even harmful way to discipline a child. Instead, try using positive reinforcement to encourage good behavior.

With positive reinforcement, you provide your child with rewards or praise when they behave in the way you want them to. It helps them to understand what is expected of them and encourages them to repeat the desired behavior.

However, if used correctly, both positive and negative reinforcement in a balanced way can be effective tools for shaping your child's behavior.

Final Thoughts: what we think about negative punishment

Negative punishments can help to stop unwanted behaviors and encourage desired ones. But it's crucial to carefully judge negative punishment's effectiveness carefully, as incorrect use can lead to bad outcomes.

As a parent, you should be aware of both the positive and negative activities your kids are engaged in, whether it's monitoring their social media usage or outdoor activities. With monitoring apps like Fenced.ai, you can ensure your kids are always supervised and safe from unwanted behavior modification.

What are the pros and cons of negative punishment?

The pros and cons of the negative punishment for children are:

How do teachers use negative punishment techniques?

Teachers use negative punishment techniques to decrease the occurrence of undesirable behavior. Techniques such as sending students to the principal's office, taking away privileges, or giving students detention can effectively stop bad behavior.