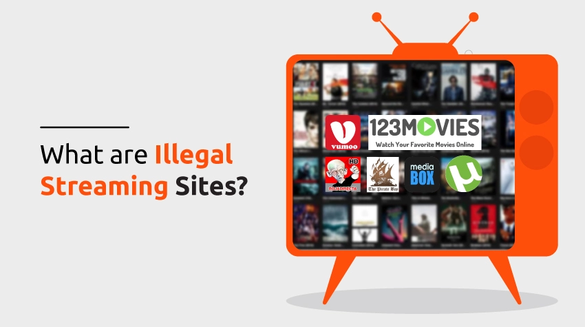 Most of us discovered a streaming service while searching for free movies or shows we would like to watch. These free online streaming with a variety of content from around the world appear, too good to be true – because they do. These websites are not only unlawful, but they also expose your device to a number of security concerns.

As the internet expanded, watching free movies online became more accessible, making entertainment more convenient. Even though there are several streaming websites that offer both paid and free content, many streaming sources of television episodes, movies, music, books, and games are illegal and may not be completely safe for users.

According to reports, over 80% of online piracy is due to illegal streaming that gets more than 230 billion views yearly throughout the globe.

There are valid reasons why the government began to clamp down on these sites. Learning how to detect and block particular streaming sites is essential for practicing safe internet use and keeping your internet browsing gadgets in good working order.

So let’s find out what illegal streaming sites are and the dangers of using them.

What are Illegal Free Streaming Sites?

Popular free streaming sites or services allow users to watch movies, stream music, and other forms of entertainment for free. These websites provide pirated content that is disseminated without the knowledge or consent of those who own the content.

Because the files are frequently different from those you would legally download from a paid streaming service, they may include malware and viruses.

Remember when you could spend all day downloading a song from Napster or Limewire? Today's streaming platforms aren't much different; they merely provide a greater range of material, such as whole movies, entire seasons of TV series, and even ebooks.

Much entertainment content is now available online, ranging from classic films to newly released films and popular TV series. The issue, however, is locating good free movie streaming sites. While there are many sites available, not all of them are adequate or safe.

While unauthorized streaming may appear to be simple and tempting, there are several disadvantages. Programmers' usage of ad pop-ups and other harmful information can result in viruses, malware, and tracking. Pirating content puts your network and other users' security at risk.

People of every age group can use illegal sites. There are a few dangers associated with illegal free movie streaming sites.

Many unauthorized streaming services also demand cash or personal user information to get access. It is very risky to provide strangers access to your information and other important credentials.

Many websites want you to register an account in order to use their services. Nonetheless, they frequently give only the bare minimum of protection for whatever information you supply. It is not commonplace for them to sell the information to third parties in order to generate more cash.

Even if they don't sell the information explicitly, the site's weak security procedures make it simple for hackers to get it. These data breaches expose you to identity theft and fraud.

Again, it is critical to emphasize that most authorities do not perceive streaming to be a concern. Torrents, on the other hand, are trackable and very certainly unlawful. Even if you take precautions to only watch, one mistake click might start downloading a torrent, which could find you in legal trouble.

The primary problem with accessing these websites is that you will wind up with some nasty viruses on your device. These websites are a haven for dangerous software such as ransomware or malware.

Consider all of the pop-ups you encounter when visiting such a site. These are infected with viruses that may be downloaded on their own. Malware is a major issue that may jeopardize both your personal information and your machine.

When famous movies and music are illegally downloaded, the labor that goes into generating them is sometimes overlooked. Many individuals use illicit downloads because they don't want to pay for them, but this also means that the people who create the items aren't getting paid.

It is critical to instill respect in children of all ages for the singers, actresses, filmmakers, and other creatives they like.

Illegally downloading and distributing such content from the internet is legally punishable by law. For instance, in the US anyone found guilty of piracy will be sentenced up to 5 years in prison and $250,000 fine at most.

Finally, it is against the law. Copyright violation results from pirated stuff. ISPs can typically monitor what's going on on their networks, thus unauthorized streaming can result in service disruption, penalties, and legal issues.

Top Illegal Streaming Sites to Watch out For

There are several streaming websites that people go and scratch for. Here is the list of 10 illegal websites to watch for.

Remember, if you find any of these programs on your child's smartphone, delete them right away. It is the nature of these types of websites and apps to change constantly, as old ones are closed and replaced by new ones, which sometimes can be dangerous illegal websites.

123 Movies is theoretically a legal and free streaming website for television shows and movies. It is a Vietnamese website that gets visited by millions of users globally to stream movies. However, 123 Movies being a free movie and file-sharing site, is notorious for being a site that distributes malware and viruses amongst its visitors.

Due to the fact that the free movies uploaded on the website are not legally licensed for viewing, the site is illegal in the USA and some other countries.

InternetArchive is one of the go-to websites for those people who want all content in a single space. It is a (Virtual Private Network) VPN-compatible site, hosting around 521K monthly visitors. It allows users to access and stream not only television series, free movies, and documentaries but also books, images, and a lot more.

Despite many sources claiming Archive to be a legal and legit free movie streaming site, in 2020, a group of 4 publisher companies filed a lawsuit against Archive for criminalizing library lending.

IPTV software or program called Area 51 provides its users with access to unlawful material. It facilitates users to watch their favorite movies, the latest movies, and classic movies. This app has been sued by the MPAA (Motion Picture Association of America) that includes several entertainment companies like Disney, Netflix, Hollywood, and more.

Alliance for Creativity and Entertainment (ACE), a global anti-piracy organization has also joined the cause to fight against unlawful contents by Area 51.

Additionally, Area 51's products are illegal, which increases the user risk of being the victim of hacking, spyware, and other internet threats.

Putlocker was founded in the United Kingdom in 2011, but its domain has changed multiple times due to seizures and suspensions, and it is unknown who administers the site at this time.

How does Putlocker function? In addition to streaming movies and TV shows online, Putlocker also provides internet indexing. There have been at least a few cases of Putlocker users violating federal copyright laws.

The Chitram TV service is an IPTV that streams Indian television networks and television programs illegally from outside the country. As a result of piracy and copyright violations, Chitram TV was ordered in December 2021 to pay DISH Network $31 million by Texas Court.

The movies, television series, and documentaries that are available on all streaming platforms are not licensed by those companies. This is the case for all illegal streaming services, including Flixtor. This issue has led to the company being shut down several times, indicating an uncertainty of its future.

Streamers of Flixtor content could also face legal consequences, not to mention the website owners, especially since ISPs now routinely monitor their customers' use of illicit streaming websites. Watching movies and tv shows on Flixtor are equally dangerous to uploading illegal content on this website.

You cannot use this streaming platform for watching movies and tv shows. It solely acts as a live tv facilitating streamers to watch free sports events.

SolarMovie is statistically one of the best free streaming sites despite being a new player in the streaming industry. The VPN-compatible website hosts around 509K monthly free movie streamers. Its streaming services are free in terms of money, but bombarded series of ads are the price you pay to stream content.

This illegal streaming website boasts an impressive content catalog featuring movies from all over the world. This streaming site allows users to personalize and enhance their movie experience through various filtering options.

Moviesjoy, a free movie site and illegal streaming service, provides users with free pirated streaming video in return for watching advertisements. The content on Moviesjoy is not always secure, in addition to being unlawful to watch.

Unfortunately, no. It is possible for illegal streaming sites to compromise users' security and safety due to a variety of factors, such as bloatware, identity theft, malware, viruses, invasive ads, phishing scams, etc. Using an illegal streaming site can also result in legal prosecution.

It is possible to protect yourself, your children, or your devices from these sites in several ways. You can:

How to Talk To Your Kid About Illegal Streaming?

If you want to know if your child is using such illegal streaming websites, you should ask them. Make them aware of such streaming sites. Make your child know about inappropriate content and the dangers that come along.

Parenting in the modern world requires open communication. Make a proper discussion with your child about misuse and attacks on the internet from such sites. If they want to listen to music or watch shows or movies, give them access to legal sites like Netflix, Disney plus, Youtube, etc.