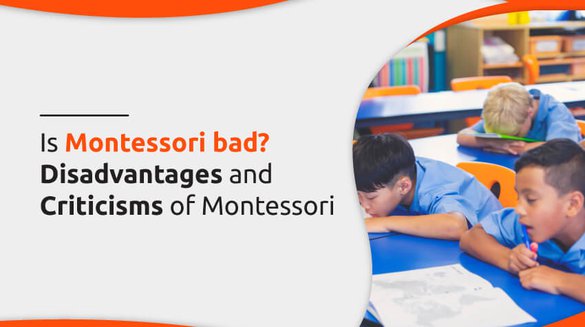 Is Montessori Bad? Disadvantages and Criticisms of Montessori

Looking for the best preschools for your child can be a daunting task. And Montessori is preferably the first option parents opt for when they are considering their children's schooling.

Montessori school is growing to be a popular choice for schooling by many parents throughout the world. Montessori pedagogy primarily emphasizes making children well-behaved and independent and initiates their own learning habits within them in a supportive and open environment.

As per the study of the National Center for Montessori, In the United States alone, there are more than 3,000 Montessori preschools, more than 570 of which are public programs.

From above, Montessori principles appear to be picture-perfect, but it has its own pros and cons. Along with its advantages, there have been many criticisms about why Montessori is bad.

The Montessori method of teaching prepares children to gain new skills and take further steps to succeed in life, which is why it is a popular concept nowadays. But what makes Montessori education so criticized nowadays? Let's examine more about the Montessori learning method and why Montessori is bad.

What is the Montessori Method?

The concept of Montessori education was first introduced by Italian physician Dr. Maria Montessori in the early 1900s. This educational process is also known as "scientific education." which is based on the theory that it is best for children to learn when they are engaged in an open and supportive environment. 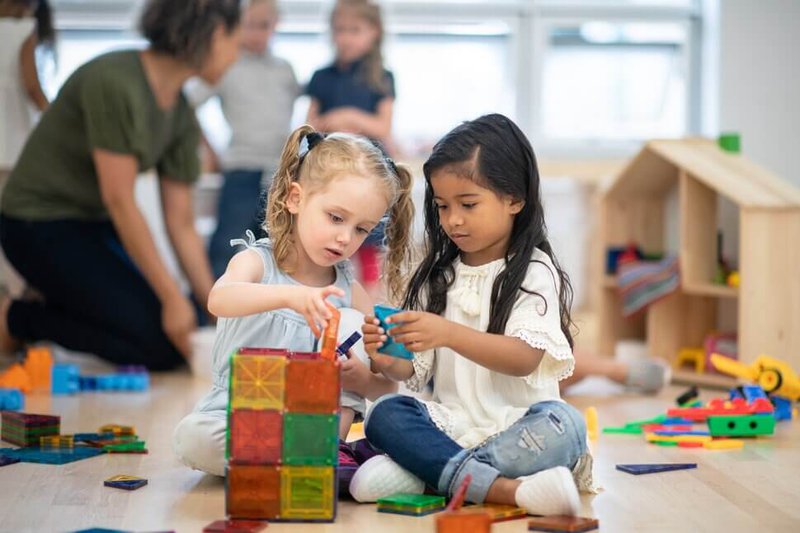 Montessori education views children as naturally curious and eager for knowledge. Maria Montessori believed children learn the best when provided the support according to their needs. It focuses on increasing independence and hands-on learning and develops critical thinking capabilities on them.

Maria Montessori interpreted how human psychology works, which her son later termed "Human Tendencies," which included the principles of exploration, manipulation, orientation, repetition, and communication that helps in shaping the actual learning process.

The Montessori learning method divides children into different classrooms based on their ages. From a few years old to 18 years of age, the multi-age classroom is mainly categorized as birth to 3 years old, age group 3 to 6, age group 6 to 12, and aged 12 to 18.

The Montessori approach to education helps in helping children to choose what they are good at and emphasizes their individuality. In such a way, children have the freedom to determine their learning process and figure out things on their own.

Montessori teachers support and guide the children through each child's learning stages. They reciprocate in a child-friendly way and communicate positively so that they learn at their own individual pace. Furthermore, they constantly encourage parents to get involved in their kids' learning.

Another thing to know about the Montessori method is that children are not assigned the responsibility to get good grades or do rigorous assignments or exams, which helps them experience learning through observing and perceiving their environment.

The Pros Of The Montessori Method

Following are some of the advantages of the Montessori method of education.

Children can explore their creativity and skills in a supportive way within boundaries in Montessori that promotes independence. When independence is provided to children, it boosts their self-confidence and competence too, that is the entire philosophy Maria Montessori believed.

Each child is unique in their way, and the Montessori education helps foster the process of self-learning so that they can pursue their interests and explore different opportunities.

At the age where children are naturally eager to learn new things, they become fascinated and curious about different things around them.

Through independence provided to children in the Montessori classroom, they are encouraged to self-learn through provisions of different Montessori materials and follow their interests., which fosters the habit of self-education.

Children are never pushed to do the same thing; they can learn at their own pace.

The mixed-age group of children in a Montessori classroom helps them gain knowledge from other students, which efficiently helps to have enhanced social interaction and communication skills.

When children are mixed up with other young children, whether their age or older children, it will certainly help them learn valuable communication skills that will help them in the long run.

Good manners and respect are needed everywhere you go, and the Montessori curriculum teaches that from an early age. Children are taught to use positive words such as "Thank You" and "Please" and express courtesy to others which can boost their emotional development.

Teaching children to be graceful and respect others' feelings helps them conduct good manners, and such children grow up to be self-disciplined and respectful individuals in the future.

The Cons Of The Montessori Method

As you have seen above, there are advantages to involving children in Montessori educational model, but there are drawbacks too.

Many often criticized the Montessori education method, comparing it to traditional schools and private school, making it a controversial subject. Let's see some of the cons of why Montessori is bad.

The first thing when parents want to put their children in the Montessori preschool is the cost of the program. Generally, the price of Montessori schools is high as learning materials and in-depth training requires high effort.

So, low income families can't afford the Montessori program for their children, which makes it unfair and disadvantageous to both the children and parents.

The concept of the Montessori teaching method is still foreign in many parts of the world, and it is said to be more common for the "white and privileged," or you could say for only wealthy, upper-class families.

Due to the unavailability of Montessori schools in many areas of the world, children are held back from receiving the basic education that Montessori provides.

Another criticism of the Montessori concept is that children have far too much independence. The system teaches you to think for yourself, but it doesn't prepare you well for working with/as a team.

When teaching them about independence, collaboration goes out of the way, making it tough for the children to work in teams. Independence should be provided in a well-structured classroom to maximize the children's potential.

Montessori schools have classrooms mixed up with different age groups. While it can benefit the younger children to observe and learn from older children, it can hinder their personal development.

Grouping children with different age groups can make children feel low and insecure about their capabilities, and the older ones often bully other children. Similarly, older children can get stuck in their learning process because of the younger ones. 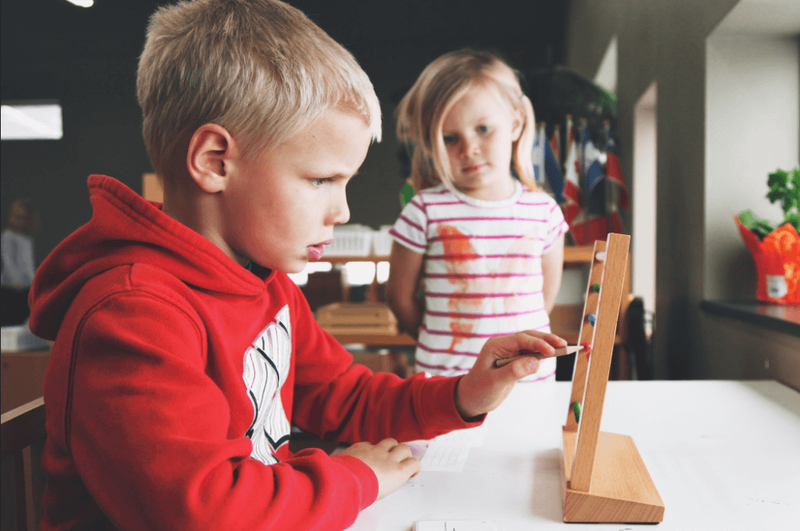 When a child is enrolled in a Montessori program, it can be difficult to adapt to the traditional or private schools setting. The expectation and rigid rules of regular schools can be a struggle for many children who have spent more than 3 years in a Montessori school.

Children are used to learning by themselves through different activities in Montessori classrooms, and it can be hard to adjust to traditional classrooms reading textbooks, doing assessments, and giving exams.

The Role of the Child and Adult

To understand more about the roles of children and adults in an authentic Montessori school, let's first understand Marias Montessori's concept, known as "Planes of Development," which includes 4 transition phases that a child passes through from birth to adulthood. 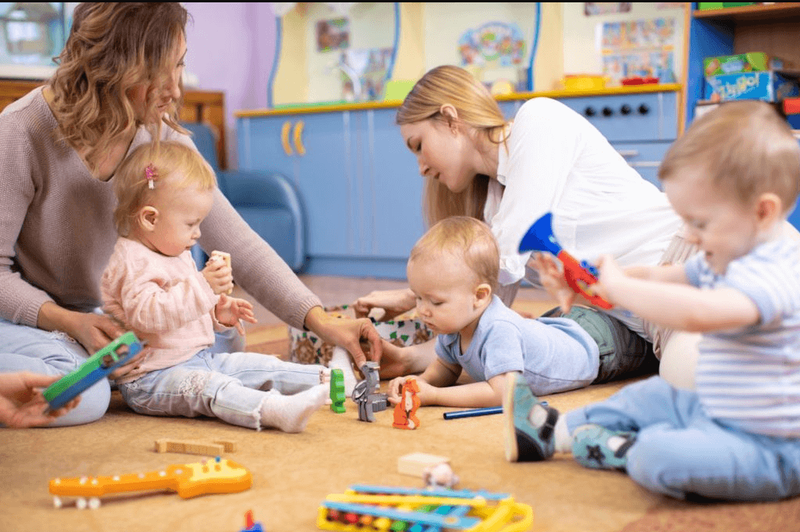 Maria Montessori called the first plane of development starts when a child is born till early childhood, i.e., 6 years of age when they possess an "absorbent mind" that can absorb every good or bad thing from the surrounding prepared environment.

In the second plane of development, children aged 6 to 12 have a "Rational mind" and are capable of imagining and thinking abstractly. From age 12 to 18, children tend to have a "Humanistic mind," which pushes them to explore humanity and contribute to their community. And finally, from age 18 to 24, adults explore the world through a "specialist mind" to find their place in the world.

And the role of adults and Montessori teacher is not to be an obstacle in the learning process but to stand as a facilitator for Montessori students.

Montessori programs provide early childhood education according to their need and support in pursuing their interests, providing them opportunities to work intelligently and with a purpose. They intervene as little as possible in the children's learning process and offer a stimulating environment to be self-disciplined.

There is no provision of punishments or work for Montessori kids; new learning materials are introduced through which children play which helps them learn practical life skills and be responsible on their own.

The basic Montessori principle is to teach children to be independent and allow themselves to express their thinking and creativity in a supportive and learning environment.

It can foster their reasoning skills and communication skills and allows children to enhance their emotional and social development. Montessori teacher helps each child at their own pace without rushing them which helps them gain concrete lessons.

However, criticizing Montessori education methods can deprive children of learning many positive affirmations such as thinking capabilities, solving conflicts on their own, self–learning, pursuing their internet, and creating their unique personalities.

Children struggle to learn communication skills and cannot adapt to a collaborative environment.

In today's world, the first thing parents consider when starting their children's education is undoubtedly Montessori. Most Montessori programs provides many benefits to the children to help them foster independence turning them into successful individuals.

But it is also a subject of criticism. So the final question arises about why Montessori is bad. Well, it depends on how you perceive it, and it can be a mixed feeling when you weigh both the advantages and disadvantages of Montessori school.

So, it is your decision what the best is for your child. I hope this article helped you to solve your doubts about the Montessori philosophy of teaching.

What is Montessori most criticized for?

Montessori environment is mostly criticized for being too expensive and thought to be for wealthy families. Also, there is thought to be too much independence which can make it harder for kids to adapt in public school or middle school.

What are the strengths and weaknesses of the Montessori principles?