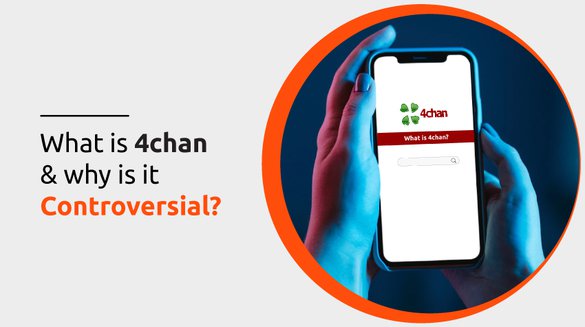 What Is 4chan And Why Is It Controversial?

You've undoubtedly heard of 4chan even if you've never visited the site. There are few online groups that have sparked as much debate outside of the dark web.

However, 4chan is not a backwater for nerds and geeks. It's incredibly well-liked. According to certain measurements, it is one of the most popular websites in the world.

The majority of male teenagers aged 13 to 17 utilize the image-sharing website 4chan. As per the latest official estimates, the majority of the population is between the ages of 18 and 25. Teenagers that use 4chan generally have several online aliases that they utilize around the internet.

It began as a response to the Japanese message board 2chan and as a place for discussing anime. The site's chat boards, which include themes ranging from video games to sexual material, are now freely available to all site visitors.

4chan is a website with anonymous imageboards in English. The site, founded in October 2003 by Christopher Poole "moot", features message boards on a broad range of themes, including anime and manga, non anime related boards video games, food, firearms, music, television, literature, fitness, history, sports, and politics, among others.

On this site, no registration is required, and the majority of users post anonymously. With almost half of its users coming from the United States, 4chan has over 22 million unique monthly visitors in 2022.

The earliest 4chan boards were dedicated to anime-related discussions and photos. It was modeled after the Japanese imageboard Futaba Channel, known as 2chan. Since it is anonymous and over the 18 age limit, it is unsafe for teens.

A number of Internet subcultures have emerged from sites like these, including lolcats, Rickrolling, wojaks, rage comics, and Pepe the Frog, as well as political movements like Anonymous and alt-right.

In the past, 4chan has been criticized for coordinating pranks and harassing websites, as well as publishing prohibited and inappropriate content.

How does 4chan work?

4chan users are not required to join up. All photographs and discussions can be shared in an anonymous manner. Visitors can choose from any of the boards when they arrive at the website. It will then say the content is only for "mature" users, deny any damage, and suggest people read the guidelines.

The site regulations state that 4chan is only for adults over 18, but others might misinterpret "mature." For example, an adolescent might believe that he or she is mature enough to access the information, regardless of whether they are over 18.

It is possible for users to 'Start a New Thread' by uploading a picture, leaving an anonymous post, or entering their own name. Other users can respond anonymously to the original post after posting. Also, the user can delete posts. It is still possible for IP addresses to be logged and banned if site rules are broken. These prohibitions can be challenged.

According to the website's statistics, the majority of its visitors are young, college-age guys. The majority of users have a strong interest in Japanese culture, gaming, technology, comic books, and ethics. These users are from English-speaking nations such as the United States of America, Australia, Canada, Japan, the United Kingdom, Turkey, and others.

This website also receives a significant amount of traffic from countries such as Sweden, Germany, and France. According to a completely scientific assessment conducted in 2010, the visitors of this site do not discuss anything offline.

It also claims that the majority of 4chan users do not allow their children to join. The site's creator advises visitors to take this entirely scientific and credible survey with a grain of salt. This site is completely anonymous, and there is no way to tell who is using it with any confidence.

Is it safe for teens to use 4chan?

Most of the content of the site 4chan is explicit and for those above 18 years of age. The content mostly contains sexual photos/videos, hacks, and dark webs. It is recommended that teens below 18 years of age should not use the website.

A few rules are present on each board, but those on /b/ or 'random' are the most popular. The boards marked as "WorkSafe" are those that prohibit inappropriate content.

There can be some activist hacker groups who could lure young people by some funny pictures or other many internet memes. In such cases, young people need to learn about social rules and unknown site links. Such links lead to several violent activities like cyber attacks, adult content, death threats, and others.

Why is 4chan controversial?

One of the largest and most notorious fringe social platforms is the anonymous image board website 4chan.

Previously, 4chan was often referred to as a hub of internet culture, with its community helping to form memes like lolcats, Rickrolling, and rage comics, as well as hacktivist movements like Anonymous—but then questionable activities emerged.

4chan has been at the center of several disputes due to the content on its imageboard. A few examples include Gamergate, cyber assaults, and violent threats in America. Sexism and violence have been promoted on the site by the community, which is understandable.

In spite of the risks associated with the service, teens may continue to use it. This might be due to the amusing memes that are exchanged throughout groups, or because the site's inventor was a teenager himself when he started the site.

Some of the 4Chan Controversies:

What to do if your teen uses 4chan?

There are certain risk factors if your teen is using the 4chan website frequently. Some of the risk factors are:

4chan may be a terrific place to locate interest-based online groups, but there are lots of people who use the sites maliciously. If your child is utilizing either site, talk to them about it and explain why it is 18+.

Also, If a post violates the site rules or includes illegal content, you can report it to 4chan moderators. Users who violate these guidelines risk being permanently banned. Nothing will be removed from /b/ by 4chan.

Overall, 4chan was created to share memes, post funny pictures, and discuss anime and other good things. But it later turned out to be used for illegal activities which might not be good for your child. The explicit contents of child pornography, internet pronography, different politically incorrect views, hacking, and all other things made this site controversial.

Hence, kids sometimes don’t know the negative part of such websites, so, as a parent, tell them both the good and bad things about such websites. Parents need to talk to their children if they see their children using sites like 4chan. There is some random board created to monitor the site rules.

There are also other sites similar to 4chan. Parents must also watch their children if they are using such sites. Fenced.ai can also offer you a great parental control service to monitor your child.

There were some who believed 4chan had become overly moderated, which led to the creation of 8chan. Google doesn't list 8chan in search results, unlike 4chan.

II. Does 4chan plan to shut down?

As of now, due to publishing controversial content, the site is taken down. But there is no official news about the site shutting down.

III. Is there any other version of 4chan?

Yes, there are other versions of 4chan like 2chan/2channel/2ch (Founder: Hiroyuki Nishimura), 4channel, 16chan, and 8chan.

IV. Doesn’t 4chan have any rules?

Yes, they have some set of rules. You can find them on their FAQ page.

4chan is an anonymous forum where you can post anything you want. The 4chan forum does not require users to create profiles, unlike Reddit and other forum sites.